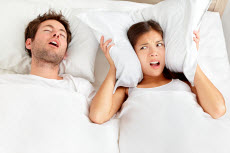 Sleep apnea is a disorder characterized by a reduction or pause of breathing (airflow) during sleep. It is common among adults but rare among children. Although a diagnosis of sleep apnea often will be suspected on the basis of a person’s medical history, there are several tests that can be used to confirm the diagnosis. The treatment of sleep apnea can be either surgical or nonsurgical. If you live in the Orland Park area and suspect you may have sleep apnea, schedule an appointment now using the green button to the right.

An apnea is a period of time during which breathing stops or is markedly reduced. In simplified terms, an apnea occurs when a person stops breathing for 10 seconds or more. If a person stops breathing completely or take less than 25% of a normal breath for a period that lasts 10 seconds or more, this is an apnea. This definition includes complete stoppage of airflow. Other definitions of apnea that may be used include at least a 4% drop in oxygen in the blood, a direct result of the reduction in the transfer of oxygen into the blood when breathing stops.

What is obstructive sleep apnea and what causes it?

First, it is necessary to describe a “normal breath.” A normal breath of air passes through the nasal passages, behind the soft palate and uvula (part of the soft palate), then past the tongue base, through the throat muscles, and between the vocal cords into the lungs. An obstruction to the flow of air at any of these levels may lead to apnea. The following are some examples:

What are some of the complications of sleep apnea?

What are obstructive sleep apnea symptoms?

Obstructive sleep apnea has many well-studied consequences. First, as one would expect, it disrupts sleep. Patients with disrupted sleep cannot concentrate, think, or remember as well during the day. This has been shown to cause more accidents in the work place and while driving. Thus, people with obstructive sleep apnea have a three-fold greater risk of a car accident than the general population.

Sleep apnea also can cause significant and sometimes serious daytime symptoms as a result of insufficient sleep at night, including:

What are the nonsurgical treatments for obstructive sleep apnea?

A dental appliance is similar to a mouthpiece and holds the jaw and tongue forward and the palate up, thus preventing closure of the airway. This small increase in airway size often is enough to control the apneas.

Dental appliances are an excellent treatment for mild to moderate obstructive sleep apnea. It is reported to be about 75% effective for these groups. A dental appliance does not require surgery; it is small, portable, and does not require a machine. However, there are some disadvantages to the dental appliance. It can cause or worsen temporomandibular joint (TMJ) dysfunction. If the jaw is pulled too far forward, it can cause pain in the joint when eating. For this reason, it is best to have a dentist or oral surgeon fit and adjust the appliance. A dental appliance requires natural teeth to fit properly, it must be worn every night, and the cost is variable, as is insurance coverage.

Continuous positive airway pressure (CPAP) is probably the best, non-surgical treatment for any level of obstructive sleep apnea. In finding a treatment for obstructive sleep apnea, the primary goal is to hold the airway open so it does not collapse during sleep. The dental appliances and surgeries (described later) focus on moving the tissues of the airway. CPAP uses air pressure to hold the tissues open during sleep.

CPAP was first used in Australia by Dr. Colin Sullivan in 1981 for obstructive sleep apnea. It delivers the air through a nasal or face-mask under pressure. As a person breathes, the gentle pressure holds the nose, palate, and throat tissues open. It feels similar to holding one’s head outside the window of a moving car. A person can feel the pressure, but can can also breathe easily.

The CPAP machine blows heated, humidified air through a short tube to a mask. The mask must be worn snugly to prevent the leakage of air. There are many different masks, including nasal pillows, nasal masks, and full-face masks. The CPAP machine is a little larger than a toaster. It is portable and can be taken on trips.

Call Complete Dentistry today at (877) 478-1353 for a sleep apnea Orland Park screening to determine if sleep apnea may affect you.